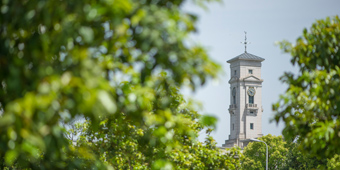 Why the tracker was used

Nottingham Ningbo was one of the first institutions to apply to be part of the tracker pilot. Marion Sadoux, academic director of online learning, recognised at once that the tracker could offer 'a more thorough understanding of our diverse student body's use of technology and digital literacy'. As online and blended learning approaches were becoming more widespread at Ningbo, the university was keen to ensure that existing tools such as Moodle, along with non-proprietary tools available to learners, were being used to best effect. The university was particularly interested in the experiences of Chinese students, who typically have different attitudes and concerns about digital technology to students in the UK. For example, at secondary school they will have had very limited access to the internet and no use of mobile technologies. Engaging key staff and learners

Marion identified and worked with key staff in the teaching and learning enhancement office, library services (including the e-learning support team), and with a number of senior managers. Staff with learning and teaching responsibilities were engaged at school and faculty level (blended learning champions), with the support of faculty directors of teaching. The survey was advertised through Moodle notifications and WeChat groups and by email directly from the vice principal for teaching and learning.

A group of student e-learning ambassadors were selected from the learning community forum to help survey their peers. There are specific challenges involved in surveying at Ningbo, where students feel they are already over-subjected to questionnaires and that their feedback is not taken seriously. There are also cultural barriers to offering personal opinions online. The student ambassadors helped other students to complete the survey in face-to-face settings. Large lectures were used as points of contact. Where these approaches failed to reassure students about the anonymity of their responses, print-outs of the survey were used and subsequently entered into the tracker.

Ambassadors have also participated in focus groups, and next academic year they will be involved in detailed analysis of the tracker findings. These ambassadors can gain recognition for their involvement through the SACA Nottingham advantage award, an incentive which is highly valued for its contribution to building a positive curriculum vitae. What the tracker found

The university found the experience overall to have been a 'useful opportunity to identify issues in relation to benchmarked practice'. Using the tracker in Jisc online surveys was 'very easy' and the Jisc guidance resources were described as 'excellent'. The data has now been analysed by school and by year of study. Further analysis is taking place in partnership with students, and each school will receive its own analysis with suggestions of action to take. Overall data has been presented to the teaching committee and used to inform the draft of a new digital learning strategy. Attention and resource has now shifted to addressing the issues identified below.

Due to the problem of student confidence, completion rates were not as high as hoped (257). Nottingham Ningbo is in the early stages of planning for digital learning, and many of the school-based structures such as blended learning champions are only just becoming established. For this reason data collection and analysis have been uneven across subject areas – in some places over 10%, in others barely registering a response. It is likely that students who did complete the tracker are those who are most digitally confident and comfortable. Despite these issues, there were sufficient responses to find some significant differences with the sector benchmark:

In the open questions, when asked what the university should start doing the key word used by students was 'more'. When asked what should stop, the key word was 'nothing'. And 'Moodle' dominated in the free text about what should be kept. This suggests that students are fully in support of the direction that digital development is going at Ningbo, though at times they would like it to progress faster. Students are also keen to access scholarly resources using their own tools and know-how, for example via Google Scholar, which was frequently mentioned.

Since taking part in the tracker project, Nottingham Ningbo has taken concrete steps towards improving the student digital learning experience particularly with improved access to wifi on campus and with the introduction of eduroam. Some school blended learning champions are planning to use the findings of the tracker to develop blended learning projects which will count towards their post graduate certificate for higher education (PGCHE), and in International Studies – where completion rates were 10% - Christane Mueller is analysing the data in detail as part of a postgraduate project.

Marion has presented details of the tracker to the 2nd UNESCO / Ministry of Education PRC conference on ICT in education, showcasing its value in supporting student engagement. The pilot process has also been highlighted in a new brochure about e-learning at UNNC.

The survey engaged students with issues of e-learning in a completely new way, and enabled links to develop between the student body, student learning champions, and the IT and e-learning support teams. It built on an earlier project in which Chinese students redesigned Moodle pages to give them a navigational and organisational structure closer to the style that they were used to. In Ningbo, all digital issues have a cultural aspect, and this project has made further steps towards a culturally-sensitive, student-led approach.

The voice of the students is very important in changing mindsets here. And I think that's of huge value in this survey.

Thanks to the student digital experience tracker we can better understand the needs and demands of our students and the importance they attach to digital skills – skills they see as key for learning and their professional futures. This gives us an invaluable basis for strategic thinking and to further develop our budding community of practice.