The University of Stirling

A downloadable transcript of the University of Stirling video case study is available in Word or pdf format.

The strategic vision at University of Stirling includes a real enhancement to the student experience. A core part of that is the digital element and the evidence gained from the insights service has been significant in helping to lead transformation - safe in the knowledge that this transformation is being led by the student voice and the student expectation.

The overall impact of running the insights service for our institution is significant. The service has given us a source of evidence which we have used to build business cases, secure investment and lead transformation - safe in the knowledge that transformation is being led by the student voice and the student expectation.

Project aims: exploring student responses and patterns of change throughout a period of digital learning transformation

The University of Stirling is an evidence-informed university and their work over two years in taking part in the digital experience insights surveys (previously piloted as the student digital experience tracker) has contributed valuable data for their digital transformation initiative.

I would say that it [the digital experience insight survey] is fundamentally part of the strategy and part of the way that we do business.

The university took part in the student insights survey pilot in both 2016-17 (554 student responses) and 2017-18 (1589 student responses). The 2016-17 pilot secured insightful data on digital aspects of the learning experience, not just local to the university but across the sector. Taking part in 2017-18 allowed the university to build a clearer picture over the medium to long-term. The university was at the outset of some fairly significant changes in developing their digital learning approach and wanted to see how the students reacted to this, exploring and monitoring patterns or changes as their digital learning transformation initiative evolved.

The initial aim was to gather as much information as possible about students’ views of the digital services offered by the university and learn more about how students operate in a digital world. This data would then be used to identify where improvements to services could further enhance the student experience. Over the two years, a recognition of the emerging value of the data means that it is now contributing to key strategy and investment decisions such as the teaching and learning strategy, the purchase and implementation of a new virtual learning environment (VLE) and lecture recording systems.

Project aims for the second year of engagement with both the student and staff insights pilots were to gather data to inform multiple and interlinked areas of work already underway. These include the next stage of the implementation of a what is still a relatively new digital learning environment, supporting academics aspirations to develop new practice and an appetite to “do things differently” as they explore tools they can use to deliver pedagogically sound student experiences.

The vision here is to develop a student focused approach that offers choice and empowers users (staff and students) – it is more about building a digital learning landscape and digital eco system than a virtual learning environment (VLE).

The university strategy is ambitious with targets to increase student numbers and open up opportunities to deliver blended and online learning. Higher student numbers could put pressure on space so the university is investigating and monitoring the benefits of practices like flipped learning.

The university has a cross-service student surveys working group which focuses on student engagement. This is partly to protect students from over-surveying and focus instead on building student engagement through more regular, smaller user experience (UX) initiatives. The insights survey team worked closely with this group to avoid clashes with other important surveys and to align with a larger communications and UX schedule.

There is a policy at the university not to email ‘all students’ and so other strategies were employed. The Library have a strong reputation for effective communication with students via social media and created a marketing brand of ‘Let’s get digital’ to support engagement throughout, using distinctive, eye-catching images and focused messages that were changed every few days.

The brand was used in a series of promotional activities such as:

The project team provided a short link to the survey which meant that they were able to monitor engagement and get some basic statistics on when link was clicked. This enabled the team to respond with targeted social media postings to encourage further participation. This was compared with the communication plan for the survey to identify the most effective channels – in 2017-18, notifications to students via the VLE triggered the most engagement.

Direct mailing from within the survey tool was not used for the student survey but, having experimented with this for the staff survey, the project team will consider using this option in the future. 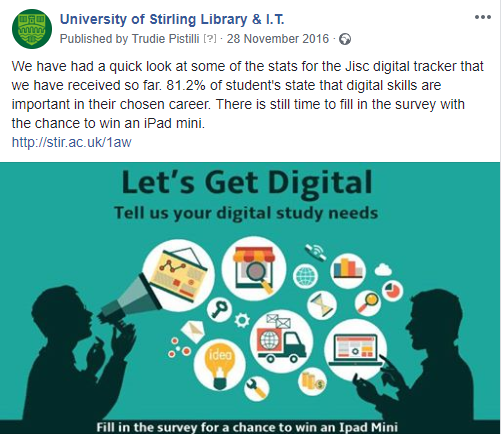 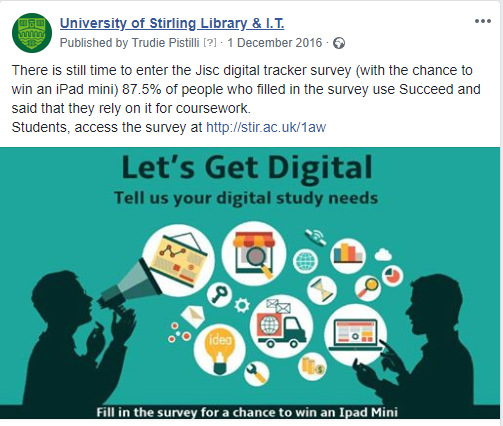 The university now has two sets of data to analyse and will shortly be adding a third set from the 2018-19 survey. In addition to cross-referencing the data against the wider sector, the university is comparing its own data across each survey. With the third consecutive data set soon to be added, a view of the data trends over a more substantial period of time will start to emerge.

Project lead Richard Aird used the service online support and guidance extensively when setting up and signed up to the mailing list to keep up-to-date with new guidance released as the project developed. Richard found the community aspects and the quality of the guides very helpful. He also used the PowerPoint and poster templates provided by the service to present data findings to colleagues.

“The insights service is really simple to implement, However, Jisc are on hand with a great support team. We were able to email them through direct email helpline, we also had access to a forum with access to other institutions who were running the survey so there is lots of support out there for both implementing and running the insights service.”

Richard has valued the additional insight that the free text comments provided by respondents has given and is identifying emerging themes by cross referencing this with qualitative data from other sources such as the National Student Survey (NSS), Postgraduate Taught Experience Survey (PTES) and Postgraduate Research Experience Survey (PRES). This is proving to be a useful source of evidence and is helpful in identifying changes and improvements.

“Through the insight service, both qualitative and quantitative data was captured and that really strongly fed back some of the needs and wants of the students at the University of Stirling.”

The benchmarked data has also proven to be valuable to the university, whereby areas for improvement have been identified within a context of minimal deviation from the sector. Richard found that being able to evidence any instances of deviation, where the university was rated marginally higher or lower than the sector, reassured stakeholders that those areas were still viewed positively by students, despite the opportunity for continuous improvement.

A surprising result was how confident students felt in relation to their own digital security and online behaviour: 99% of students believed they behaved in a safe and respectful manner online, 90% felt they had a positive online profile and 93% felt confident in changing privacy settings and managing passwords. This is at odds with support requests monitored by Trish Davey, information centre and digital skills manager at the University of Stirling.

It was also interesting to note that, in common with national benchmark data, students at Stirling turn first to fellow students when they need help.

All of the information gained from surveys, student engagement and other related activities is fed into the Digital Learning Project Board which provides the direction, scrutiny and governance around the digital learning agenda at the University of Stirling. This board is currently shaping a new learning and teaching strategy.

In addition to contributing to longer term initiatives the university has acted responsively to address some of the findings. Actions already in progress include:

Tips for others and lessons learned

The survey and service work best where an institution recognises and embraces it as a major institutional survey. It is a national survey that is talking to the right stakeholders and will gain internal recognition.

The data gathered from the surveys is enabling the University of Stirling to start to build a historic picture of the data, and to explore whether the changes implemented are making a difference to the perceptions of their students.

Work is underway to cross reference data from the staff survey with that of the student survey and explore any differences in perception or opinion. At the same time, the university is cross referencing qualitative data from sources such as NSS, PTES and PRES against emerging themes from the insights surveys to gain a richer picture.

Engaging with students to build a better digital environment

Giving students a voice in the digital strategy