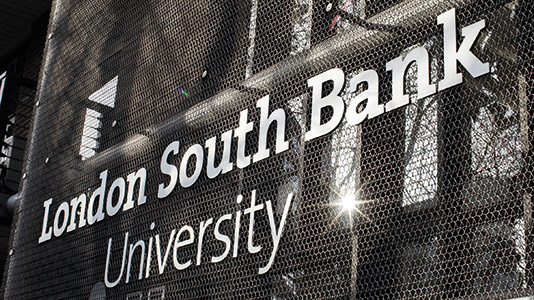 The initial impact has been to identify key areas for broader discussion about how we develop institutionally. The insights survey has given us data to inform the development of our digital strategy and infrastructure.

As head of digitally enhanced learning, Marc’s role involves developing the digital strategy and infrastructure at London South Bank University (LSBU). With little previous data available on how students felt about the digital provision or any specific support requirements, Marc and colleagues were keen to take part in the 2017-18 student digital experience insights pilot (previously known as the student digital experience tracker) to gather reliable data and build up a broad evidence base upon which development and investment decisions could be made.

The fact that the survey provided national and sector benchmarking and would highlight successes as well as areas for development was also attractive. The intention was that the data would contribute to the wider discourse about the role of digital in the overall student experience at LSBU. The hope was that benchmarking data would also provide an indication of the current situation at LSBU and address any misconceptions of being ‘behind’ others in the sector.

LSBU established a small working group involving the head of digitally enhanced learning, a member of staff from the library and learning resources team and the vice president of LSBU student union (academic).

A total of 895 student responses was received from a population of approximately 17,000 (5.26% response rate).

Like others, LSBU found identifying a time that didn’t clash with other surveys or significant student activities to be challenging. The survey was launched in the lead up to Christmas when less teaching was taking place and the aim was to target as broad a population as possible.

The community support from other institutions involved in the pilot was helpful and some shared the promotional materials they had created, helping LSBU to get up and running quickly. The working group used a variety of channels to engage students including: posters in the library, emails, electronic notices, social media and also ensured academic staff were aware of the initiative so they could promote it directly to their students during module delivery. The students’ union were proactive in using their social media channels and, because the library was being heavily used at the time of launch, the staff there directly encouraged the students to participate.

A prize draw of a Kindle device was offered as an incentive.

The interval between the decision to take part in the pilot and implementation was short and so customisation was limited to identifying responses from specific schools, age groups and different genders. The university has large numbers of mature learners in some cohorts so understanding the impact of age on the student digital experience is of interest (51% of learners are aged over 25).

A high level analysis of the data was conducted in the summer of 2018 and work is underway to drill down further to see what else the data reveals. Data from module evaluation questionnaires (MEQs) which include questions about the virtual learning environment (VLE) and how it is being used, also feeds into the data analysis processes along with other annual monitoring data. Mapping across multiple data sources will help LSBU to identify patterns. The business intelligence team at LSBU are working with the project team to analyse the data which is also valuable to them and produced a comprehensive report. The data set achieved is representative of the wider student demographics at LSBU at LSBU.

The PowerPoint template created by the insights service helped the project team present the data back to key stakeholders.

A surprise finding was that smartphone usage was less than anticipated (76% at LSBU/80% national benchmark data). Further investigation is underway to find out whether this is age, discipline or cohort related.

The data gathered from the survey is being used to support and drive development of an institution-wide digital strategy for LSBU that looks holistically at the overall digital environment and identifies areas for prioritisation.

The survey has been helpful in bringing together technology-enhanced learning and IT perspectives. The data and student concerns about infrastructure issues have helped everyone to see the need for a cohesive approach if we are to fulfil our digital ambitions.

Some of the actions already underway include:

The data from the survey is being used to contribute to the broader corporate plan which includes a drive to make more use of digital technologies. For future insights surveys, the project team would like to customise the survey further to explore and compare the experiences of students on different campuses. LSBU hope to use the insights survey again next year and to use the data to monitor progress internally as well as against national benchmarking data.

Engaging with students to build a better digital environment